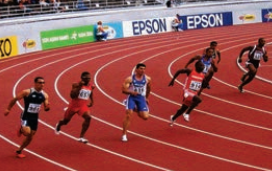 The commercialization of sport is not a cultural universal, but a product of unique technical, social, and economic circum- stances. Sports in the colonial United States were usually unstructured, spontaneous activities that the participants initiated, coordinated, and managed. Only in the latter part of the 19th century did organized sport cross the ocean from Great Britain and arrive in America. At that time, urbanization forced a large number of people to live in new settings and to abandon traditional leisure activities, which included drinking, carousing, and gambling. The dominant class sought to replace them with activities such as baseball, horse racing, and boxing.

Setting the stage for future commercializa- tion, industry moved to meet the burgeoning desire for organized sports. The most promi- nent producer of sports equipment was Albert Spaulding. In 1876, he opened the A. G. Spaulding and Brothers Company. Spaulding’s ability to influence the organizers of the various professional sports leagues allowed him to sell his goods and to capture a virtual monopoly on sporting goods by the latter part of the 19th century. But others quickly followed, and by the beginning of the 20th century, began producing their own lines of sports equipment. During the first two decades of the 20th century, the growth in sales of sporting goods and services glittered brighter than ever. Commercial spectator sports attracted the interest of much of the population. Commercialized sports was one of several male bastions.

However, the by the 1920s, women began to take an interest in both watching sports and participating in sports. Although the commer cialization of sports slowed during the Great Depression and World War II, by the early 1950s it had solidly established itself as feature of modern Western culture.

Sponsorship has seen a rapid growth in recent years in both the dollars devoted to it and its prominence as a legitimate element of a company’s promotional mix. As traditional media have become more expensive and cluttered, sponsorship is viewed as a cost- effective alternative. As an element of the promotional mix, sponsorship has been a stepchild when it comes to a careful under- standing of how it works and its effect on consumers. While the promotional element of advertising has been carefully researched, sponsorship has rarely undergone systematic study. It is usually mentioned as “war stories” of specific examples which worked well for a company. Discusses the definitional dilemma of sponsorship, and proposes a revised definition. As a step towards better understand ing the effects of sponsorship on consumers, develops and empirically tests scales for three attitudinal constructs: attitude towards the event; attitude towards commercialization; and attitude towards behavioral intent. Results show that the three constructs consistently appear across three global sports events.

The Commercialization of Sport

The commercialization of sports is that aspect of the sports enterprise that involves the sale, display, or use of sport or some aspect of sport so as to produce income. Some experts

prefer the term “commodification of sport” as a label for the same process. Interest in the commercialization of sport has existed for several decades, but only in recent years has the phenomenon has been taken seriously on a larger scale. The first attention came from a small group of critical, mostly leftist writers, who have now been joined by people from all political and social perspectives.

Professional sports, a big business that has grown rapidly over the last three decades, may be the epitome of commercialization, its influence pervasive throughout. Athletes, support personnel (managers, coaches, officials, media persons, lawyers, and agents), and sports team owners benefit handsomely from the willingness of sports fans to pay to watch their favorite sports and to purchase the commodities endorsed by sports personalities. Hundreds of professional athletes earn well over $1 million a year. Before 1977, $1 million contracts did not exist. By 1994 there were well over 200 professional athletes who earned salaries in excess of $1 million.

Forbes’s 1994 list of the top-earning athletes included basketball stars Michael Jordan at $30 million and Shaquille O’Neal at $17 million, golfers Jack Nicklaus at $15 million and Arnold Palmer at $14 million, and boxers Michael Moore and Evander Holyfield at $12 million each. In most cases, athletes’ endorsements make up over 90 percent of their earnings. Owners of professional sports franchises are some of the wealthiest people in the world. They continue to make large profits from their sports teams.

In the United States there are about 110. professional sports franchises, including football, basketball, baseball, and hockey. The combined revenues of these four sports leagues equaled $5.1 billion in 1993. In addition to the money from gate receipts and television revenues, owners realize profits through the buying and selling of franchises, Sports franchises are very profitable short and long-term investments. For example, the Dallas Cowboys football team was purchased for $600,000 in 1960. In 1989 the team sold for $140 million. The profits for the players, owners, and other associates of professional sports come from various sources

The ideal of the modern Olympic Games stands in stark opposition to the commercial- ism of sports. However, many commentators have argued that this idealism has been Games compromised to the point that the Olympics is. currently the epitome of commercialism. In the early part of the 20th century 98 percent of the Games’ amateur competitors made no money from their participation. In contrast, today’s Olympic athletes are far from amateurs. The International Olympic Committee recognized the inevitable creep of commercialism and professionalism, and instead of requiring participants to be amateurs they merely ask that participants have an “amateur spirit.”

The Games have also come under criticism because of the movement toward corporate sponsorship. While

most Olympic administrators recognize the need for support from the private sector, there is concern about how much help and control should be exchanged, Private enterprises that range from soft drink producers to automobile companies compete to be an official sponsor of the games. For example, Coca-Cola paid $22 million for the guarantee that no competitive soft drinks be allowed to display the Olympic symbol for the Seoul

WIN A HIT with ASH BARTY!

The mass media have been linked to the commercialization of sports. They exist in a symbiotic relationship with sports, each benefitting greatly from the other. Sports employs all forms of the mass media. Books and magazines that specialize in particular sports are published regularly. Newspapers often devote up to one third of their no advertising space to sports coverage. Radio stations all over the country have changed their menu to include 24-hour coverage of sports. However, television has affected sports most profoundly Television and sports are involved in a relationship in which the economic stakes are very high. The return on the investment by the major television networks is just as impressive.

Television has altered individual sports in the effort to accommodate larger viewing audience. In some sports, additional time-outs have been implemented to allow for more! commercials. In tennis, the rules regarding. play-offs have been changed to allow matches to fit into prescribed schedules. The scheduling of events in the Olympic Games has been modified not to provide athletes with theoptimum conditions for peak athletic performances, but to allow large audiences in the United States to view events at more convenient times

A rise in gambling on sporting events has been an indirect consequence of these phenomena. Great Britain and Las Vegas permit some legal gambling. However, it is likely that more money is bet on sports illegally. According to McPherson, Americans lose an estimated $200 million on sports bets annually. The link between sports and gambling is complex.

How advertising impacts the purity of sports The commercialization of sport has evolved over decades, from the 1950’s advertisements of athletes pitching shaving cream to the multi million dollar shoe endorsement deals of today. Much like other aspects of capitalism, when a profit is to be gained by promoting a consumer product, sport is not exempt from commercial ization. However, even when adjustments for inflation are figured, the astonishingly lucrative field of sport commercialization has become a staple of product promotion and corporate gains.

Beginning as early in life as Little League. Youngsters are conditioned by advertising to employ the popular brand, those promoted by their favorite athlete or the ones that have

national name recognition. These products are imprinted onto the fabric of society as accept- abie, via mass commercialization in the structure and implementation of ad campaigns pinpointed at target audiences. Nothing is left to chance in promotion of sport products, consumer research is exactly that, and is approached as a scientific study with definitive direction aimed toward advantageous financial result

On the level of professional sports, commercialization of sport is undoubtedly the most profitable, for both the advertiser and the fan Without advertising support, professional sports would not have progressed to the number of franchises present today, and their financial stability would be questionable on an individual basis. NASCAR has taken the

commercialization of sport to new levels of unabashed sport profiteering, with race cars that have become 200 mile per hour rolling billboards.

Commercialization and Media in Sports

Sports have exploded across the globe in every aspect to the game. The author says that commercial sports have become global in scope for two reasons. First, those who control, sponsor, and promote them seek new ways to expand markets and maximize profits. Second, transnational corporations with production and distribution operations in multiple countries can use sports as vehicles for introducing their products and services around the world. Many professional organizations now have games played in other countries and their merchandise is sold all over the globe. Commercialization has also given many different people the chance to fulfill their dreams, without the sponsors covering many costs some people will not be able to participate in the big events to be noticed. Players’ salaries have been one of the biggest positive impacts, for players at least, since commercialization has become big.

While there are probably more positive than negative impacts of commercialization in sports, there are still some negatives worth mentioning Personally, the biggest negative aspect of commercialization is the craziness of advertising in sports. Racing is the biggest; you can barely tell the color of some of the cars because of all the decals on the cars. I believe that advertising and sponsors are necessary, but it gets carried away in some instances.

The Model Mag is an iconic and venerated magazine, encompassing the global industry happenings diligently without any bias.

The core idea behind Model Mag Industrial magazine is to give voice to the concerns of Marketers, Industrial Community, Multinational Corporations, Manufacturers…